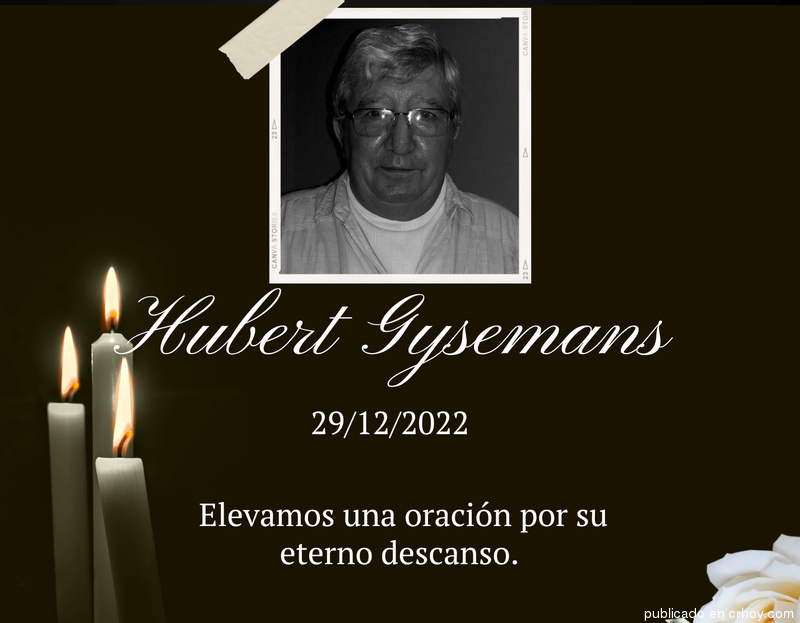 Hubert Gysemans, an 87-year-old Belgian and former president of the Guanacaste Chamber of Tourism (Caturgua), died in a traffic accident in Lorena de Santa Cruz, Guanacaste.

The preliminary report is that Hubert Gysemans, the 87 year old Belgian , lost control of the car and fell into a 1.50 meter ditch for unknown reasons.

According to police sources, the blow was so strong that the seat belt burst. The emergency bags on the steering wheel were not activated, only those on the sides according to initial reports.

The authorities are investigating the causes of death, but they do not rule out that it may be due to health problems. Sr. Gysemans had a similar accident in Florida many years ago that had him hospitalized for months.Firefighters from Santa Cruz came to the site, who declared Sr Gysemans without vital signs and that the only visible marks were on the face.

Traffic officers arrived to cordon off the scene and prepare a report in conjunction with the Public Force followed by OIJ agents who arrived on scene to remove the body.

Gysemans had lived in Guanacaste Costa Rica for more than 36 years and since 1994 he was honorary president of the Guanacaste Chamber of Tourism (Caturgua).

Long time resident and owner of the Casino|Disco|Restaurant Amberes on the hill overlooking Flamingo Marina. The building still exists but has been closed since the original marina was closed down. Amberes was a well known destination especially during the New Years celebrations.

Sr. Gysemans was well known in the tourism industry, remembered for his active participation in the pre-opening commission of the Daniel Oduber Quirós International Airport, in Liberia, as well as the joint commission of the public and private sectors to undertake this airport project.

Gysemans promoted the Guanacaste Region to the world to get airlines to land in Guanacaste for the first time.

Hubert Gyseman was a key figure in the placement of the BCR in Flamingo, the opening of the airport, the arrival of Delta Air Lines in Guanacaste and much more. He was awarded the "Professional Merit Award" by the Costa Rican Association of Tourism Professionals-ACOPROT in 2007.

In a presentation he made a decade ago he described the early years of Flamingo and his vision:

Twenty-six years ago, together with my family, we came to Costa Rica for a walk and I confess that it was love at first sight, because we decided to leave everything in Europe to settle here. My wife Inés, now deceased, was key in this happy adventure and from here, jubilant, I remember her with emotional affection.

So my nose and exquisite taste for beauty met the greatness of the Costa Rican people, as well as the abundant flora and fauna, bastions of sustainable development and great allies of tourism.

I remember that we arrived in Flamingo, which was a desolate place, and together with three partners, we built an infrastructure and today everyone knows about a highly developed coastal site.

From Flamingo we envision a promising future for Guanacaste, and together with Costa Rican and foreign businessmen we founded the Guanacaste Chamber of Tourism (CATURGUA) in 1995, and from there we began to fight great battles so that the natural beauties of Guanacaste would be known by nationals and foreigners.

We were protagonists of the first airline, we managed to make the Daniel Oduber Airport meet all the requirements of international aeronautics, and thus be empowered to receive flights from other countries on a commercial scale.

I want to express my enormous gratitude, for the great support we received at that time, from the President of the Republic, José María Figueres, who gave his full support to open the airport. By happiness we open the airport once and for all. I don't have time to tell you about the long and anguishing process that this adventure of positioning Guanacaste on the world aviation map meant.

I tell you that what today is the arrival of thousands of tourists every month to the grasslands, through various commercial airlines, rose from a quixotic that began one Sunday afternoon in Flamingo, when I remembered that in Hacienda Pinilla, near Tamarindo, my friend Pat Patillo, who lives in Atlanta, was there and I went to tell him: look Pat, they are already setting up two flights a day to San José, why don't you help me to put at least two a week to Liberia and so Pat took the message.

But that's when the attack of September 11 fell and everything I know went down the drain. In May 2002 we received a letter from Delta, that they were ready to put Liberia on the routes by 2002.

There was a condition there, which was that a $2.9 million trust be made to guarantee initial losses, which fortunately did not occur, and on December 2, 2002, Delta's first commercial flight arrived, which was the spark that lit the light for that other companies landed in the Daniel Oduber.

The arrival of Delta Air Lines opened the floodgates of an exponential tourism boom that benefits Guanacaste and Costa Rica.

In less than a year, Continental and American Airlines followed the same example and came to Liberia. We are not satisfied with what has been achieved, because the great challenge is to improve the standard of living of thousands of pampas families who are still in poverty and we must put our efforts into that, so that tourism benefits all of us who live in Guanacaste.

CATURGUA, with its partners from all categories of the business and tourism world, is the cornerstone that moves the wheels of Guanacaste development with a business, managerial and pragmatic sense.

And to finish: I want to respectfully ask the legislators, press, political and community leaders of Guanacaste to help us consolidate tourism every day that generates employment and income for a better quality of life.

Remember that tourism is present 24 hours a day, 365 days a year, day and night, and you have to work with enthusiasm.

For this reason, we must redouble our efforts so that educational institutions train our children and young people to master languages, because the tourists who arrive belong to various nations that speak different languages.

One thing is certain. If not for the efforts of Hubert Gysemans, his associates and others with the same vision and enthusiasm for the region the area would never have been as popular a destination as it has become. He was one of a handful of people who help create Flamingo and put Guanacaste on the world stage.

May God Bless and take care of him.