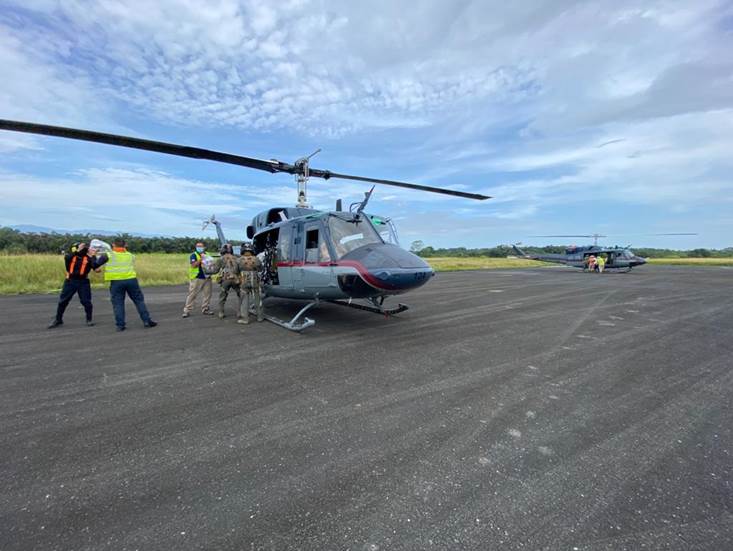 During eight consecutive days of the emergency due to rains, which hit Turrialba, the Caribbean and the Northern Zone, the humanitarian actions of the National Commission for Risk Prevention and Emergency Attention (CNE), the Committees and the institutions are focused on bringing food to disaster areas.

In total, 27 air operations have been carried out to carry a total of 472 food packages, throughout the week.

To move food from the CNE warehouses to families or distribution centers, several institutions have provided their trucks and four-wheel drive vehicles to enter isolated communities. These relief packages are given to families who are returning to their homes, or to those who still remain in the shelter.

In Sarapiquí, more than 150 packages were delivered to the border communities of Cureñita and Cureña. In Limón, 500 food rations were transferred for the families of Sixaola and last Friday, a new entry was made with another 500 packages.

"After an emergency of this magnitude, the most urgent thing is to provide food and personal hygiene items to people; in some cases drinking water, since its sources could be contaminated and it is vital to provide reservoirs and liquid for their consumption", said Sigifredo Pérez, Director of Risk Management, of the CNE.

It has been necessary to establish humanitarian bridges to transport food by air, by boat and in 4x4 vehicles.

In Pococí, Siquirres, Guácimo and Matina, visits will continue to assess damage to roads, bridges, dikes and homes. The MAG works to assess the loss of crops in the areas and the impact on livestock production. In Matina, SENASA works in the care of animals within emergency zones, applies vaccines and dewormers, as well as provides food for pets.

These evaluations reinforce the work already done by other cantons, in charge of institutional teams, even to determine an approximate number of houses have partial or total damages.

In the Sarapiquí canton, the Municipal Emergency Committee will work during this weekend to attend to the shelters it has in various parts of the canton. IMAS works on the assessment of affected families. In Pococí, more than 350 packages are taken by boat to the communities of Puerto Lindo, Barra Colorado Norte, Colorado Sur, Jobo, Isla Brava and surrounding areas, thanks to a team made up of institutions and the supportive contribution of civil society.

More than 2,000 people have returned to their homes to continue cleaning and disinfection after their homes were flooded. On the other hand, 37 temporary accommodations (shelters) have already been closed, including the one that was installed in the Talamanca CTP.

As of this Friday, the Municipal Emergency Committees serve 1,445 people who remain in a temporary shelter, many of them installed in communal halls, churches, gyms. Sarapiquí is the canton with the most shelters open with a total of 16 with 1246 people, the other 7 shelters, still operating, are located in Turrialba, Jiménez, San Carlos, Guatuso and Limón.

Most of the electric fluid services were restored, according to the Costa Rican Electricity Institute (ICE), registering an advance of recovery in the Caribbean Region of 99.77% and 100% in the Brunca Region . With regard to the rehabilitation of telecommunications, work is still ongoing in Bratsi and Valle de la Estrella.

Acueductos y Alcantarillados has all the services operating normally in the most affected areas, while the ASADAS still has a report of 30 systems that remain affected and 11 that have been recovered.

In addition, on the tour there was an Inspection on the Horquetas Bridge and a visit to the Agape shelter in the facilities of the Methodist church, where about 200 people were received, victims of the floods in the Horquetas district and its surroundings.

According to information from the IMN, starting in the early hours of Sunday, an increase in rainfall over the country could be perceived, especially in the Caribbean and the Northern Zone, due to the transit of tropical wave # 20, an event that could even leave rains in the Central and South Pacific.

Faced with this scenario, the CNE asks the population to be vigilant in areas prone to new floods due to overflowing rivers, landslides and falling material on the roads; and the status of current alerts for the country is recalled, in attention to hydrometeorological phenomena:

Facing a long weekend, and in light of the forecast of increased rainfall, the CNE reminds the population to avoid traveling in the afternoon or at night, to drive with great caution on those routes prone to landslides. Do not drive at high speeds, and turn on the vehicle lights when driving in the rain.

Given the possibility of an electrical storm, the population is recommended not to stay in open places, away from trees, power lines and communications towers