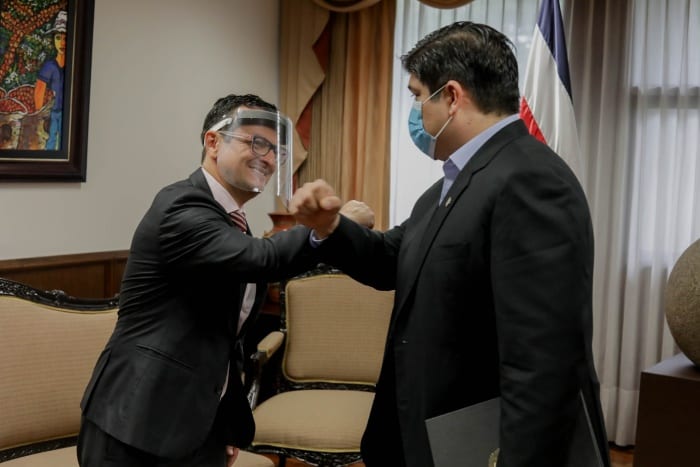 Despite restricted travel within the country, the highest weekly increase in Covid-19 positive tests, 10 deaths related to Covid19 in the last 24 hours, mandatory masks and ground borders with Panama and Nicaragua remaining closed the Minister of Tourism announced at a press conference today that Airports will open on August 1st for tourists to return to Costa Rica.

The Minister of Tourism Gustavo Segura made the announcement, with the President and the Minister of Health present. As of August 1st, the country will gradually reopen borders for flights to and from the European Union, Canada, and UK, this translates to possibly five flights a week. He added that the announced decision translates into "drops of hope" for the more than 600,000 people who depend on tourism.

While the announcement is the latest sign of hope for a tourism sector that has been devastated by the border closing, it is in no way enough to save many businesses that depend on tourists. International airports received up to 552 flights weekly prior to the airport restrictions, so the news of resuming five flights per week is not something to cheer about, although it is a step in the right direction for those with tourist related business.

"This first stage of opening to international flights includes less than 1% of the volume of flights that the country received before the COVID-19 pandemic (552 weekly)," said Health Minister Daniel Salas. The entry of foreign tourists was suspended back on March 18.

Of special note, commercial flights from the US are excluded from the list of weekly flights allowed to bring tourists, and it remains to be clarified whether Americans will be allowed to enter Costa Rica. This too may change.

United airlines, for example has several weekly flights from Houston, Texas to San Jose, and American Airlines and Delta have also planned to resume flights. It is unknown if these airlines will have to change their plans in light of the restrictions on the number of flights allowed per week.

Anyone who has arrived at the Daniel Oduber International Airport in Liberia between 11:30am and 1pm knows how crowded it can be waiting in line to get through Immigration and then through Customs during the peak of tourist season. Obviously the Airport will have to restrict the arrival and departure times to avoid these crowds, so reducing the amount of flights is critical to that plan.

And looking further into the fine print of the details announced regarding the requirements to entry, there are several key points to mention.

As a bonus, upon landing on Costa Rican soil, travelers must carry facial protection and comply with the strict protocol of the air terminal, respecting physical distance, comply with taking their temperature and follow any other sanitary instructions.

The good news in the announcement, only for areas under a Yellow Advisory, includes the "visiting hours" of the beaches will be extended from 5:00 a.m. to 2:30 p.m., and allowing the practice of surfing.

The operation of tours with outdoor activities will be permitted, including hiking, trekking, canopy, cable cars, raft rides, water recreation and air recreation, all under strict compliance with sanitary protocols.

These protocols will be enforced by the Institutional Protocol Verification Brigade COVID-19 with the collaboration of the ICT regional headquarters.

Areas under Orange Alert as of August 1st will likely remain under the current restrictions. Hopefully more will be upgraded to Yellow by then.