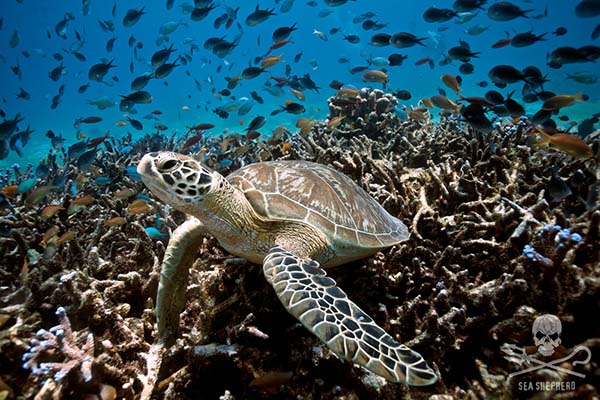 Any Sea Shepherd volunteer found patrolling beaches or engaging in sea turtle conservation work will be detained and deported.

In Costa Rica, the Jaco Police teamed with Sea Shepherd on the campaign to protect nesting females and nests from poachers. Nests were being relocated to a hatchery run by the Jaco police force.

Sea Shepherd was informed on Friday that the Jaco police is no longer authorized to work with the non-profit organization.  Captain Osvaldo Rodriguez, Chief of Garabito Police Department in Jaco, was ordered not to work with Sea Shepherd because they are “known criminals.”

Presumably the “criminal” reference stems from the Red Notice issued by Interpol on Sea Shepherd Founder Captain Paul Watson back in 2012 for the Costa Rican charge of interfering with a Costa Rican shark fining operation.

“This is a very difficult moment for us volunteers here in Costa Rica,” said Operation Jairo II Ground Leader Cristina Cely. “In less than 2 weeks we have saved almost 2000 eggs from the beaches of Hermosa, Claritas and Jaco that most likely would have been poached, and 63 very disoriented hatchlings that didn't stand a chance to survive if we weren't here. Our presence has made a difference for these eggs and hatchlings, but now, thanks to mediocre minds we have to stop and the only ones who have everything to lose are the turtles.

Added COO David Hance: “I’m disgusted that the Government of Costa Rica is willing to sacrifice the lives of 1000’s of turtles, simply because they are motivated by international politics.”

“No good conservation deed goes unpunished in Costa Rica,” noted Sea Shepherd President and CEO Paul Watson. “If you stop shark finning or rescue baby turtles you are considered a criminal by the Costa Rican government. Costa Rica is a country where rescuing turtles can literally get you killed. This government can always be depended upon to side with the poachers.” The Costa Rican Red Notice: A Fourteen Year Saga

Prior to his return to the U.S. last month, Captain Watson had been living in France under the protection of the French government for two years. He is wanted by Costa Rica where he is accused of intervening to stop a Costa Rican shipping vessel, the Varadero I, that was illegally finning sharks in Guatemalan waters in 2002.

After obtaining permission from Guatemalan authorities to bring the vessel in for breaking the law, Captain Watson attempted to arrest the vessel, but the poachers broke free and fled toward Costa Rica.

Later that month the Costa Rican authorities filed a criminal complaint alleging that Captain Watson and his crew threatened and attempted to murder the seven crew members of the Varadero I, as well as damaging their vessel. This complaint was based on testimony supplied by the Varadero I crew. A local foundation offered Captain Watson counsel, yet neither he nor his appointed counsel were provided timely notification about a preliminary hearing on the matter in December 2002.

Sea Shepherd filmed the entire incident that occurred at sea, while the Varadero did not provide any documentation.

Although the allegations of attempted murder were later dropped when the court viewed Sea Shepherd’s footage, new charges were added. However, Captain Watson was never informed of this development or given a summons to appear.

When Captain Watson did not appear for trial, the Costa Rican court declared him a “rebel” and issued a warrant for his arrest on the charge of “violation of ship traffic.” This charge came a decade after the incident!

In August 2012, Interpol issued a Red Notice on Watson for the Costa Rican charge of “shipwreck endangerment.” Captain Watson fled Germany after some 70 days of house arrest and eventually ended up in France. Operation Jairo History

Operation Jairo II, which began in August of this year, spanned three locations beginning with Florida before moving on to Honduras and Costa Rica. The campaign continues to be active in Honduras.

Sea Shepherd first came to Costa Rica in 2014 for Operation Pacuare, which saved the lives of nearly 3,000 sea turtles. Upon return to the country a year later, the campaign was renamed Operation Jairo, after Jairo Mora Sandoval, a Costa Rican turtle defender who was brutally murdered on 31 May 2013 while attempting to protect leatherback turtle nests.

There are seven species of sea turtles in the world. Four have been identified as “endangered” or “critically endangered,” and two are classed as “vulnerable,” by the IUCN Red List of Endangered species. Sea turtles are some of the oldest living creatures, one of the few who’ve watched dinosaurs evolve and become extinct. They are now facing the same fate as their predecessors.