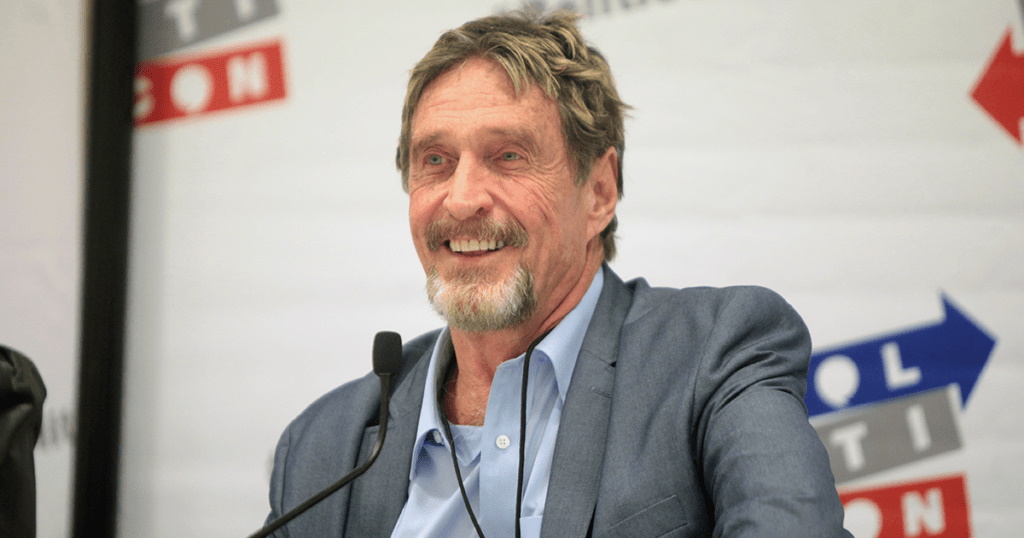 Cybersecurity entrepreneur, cryptocurrency advocate, and former U.S. presidential candidate John McAfee has been found dead in his jail cell in Sant Esteve de Sesrovires, Barcelona, Spain within hours of a court’s ruling that he would be extradited to the United States on charges of tax evasion and failure to disclose income.

According to Spanish outlet El Pais, the 75-year-old McAfee was found “dead in the cell, and the prison medical services have intervened to carry out resuscitation maneuvers, according to the Department of Justice, but they have not been able to save his life.”

“The Mossos are investigating what happened, and everything points to a suicide, as reported by the Department of Justice,” the report states.

McAfee had described the extradition request as “politically motivated,’ and noted that he was “public enemy #1” of the United States government.

McAfee was arrested on charges of tax evasion in October 2020: John McAfee, one of the original pioneers in the anti-virus software industry, has been indicted by the US Justice Department of 15 counts of tax evasion.

The Justice Department’s indictment alleged that McAfee earned millions of dollars in the years 2014 to 2018 from promoting cryptocurrencies, engaging in consulting work, appearing at speaking engagements, and selling the rights to his life story for a documentary.

In each of those years he failed to report any income to the Internal Revenue Service.

McAfee was arrested in Spain where he was awaiting extradition to the United States.

McAfee had stated that if he died in prison it was not his own doing. This has led to speculation that he may have been killed. As of this morning news is spreading of a possible deadman's switch having been activated. Files are being released linked to his accounts.

Back in June of 219 he tweeted “I’ve collected files on corruption in governments. For the first time, I’m naming names and specifics. I’ll begin with a corrupt CIA agent and two Bahamian officials. Coming today. If I’m arrested or disappear, 31+ terabytes of incriminating data will be released to the press,” .

Eleven days later, he added: “The instant I disappear the information is released. Those named would be crazy to kill me or collect me. They are simply praying I live forever. If it’s released, revenge takes over and I’m dead.”

“Getting subtle messages from U.S. officials saying, in effect: ‘We’re coming for you McAfee! We’re going to kill yourself.’ I got a tattoo today just in case. If I suicide myself, I didn’t. I was whackd. Check my right arm,” John McAfee wrote while sharing an image of his “$WHACKD” tattoo in November 2019.

In an October 2020 tweet sent while he was in a Barcelona jail, John McAfee added: “I am content in here. I have friends.The food is good. All is well. Know that if I hang myself, a la Epstein, it will be no fault of mine.”

Expect to hear more over the coming days.