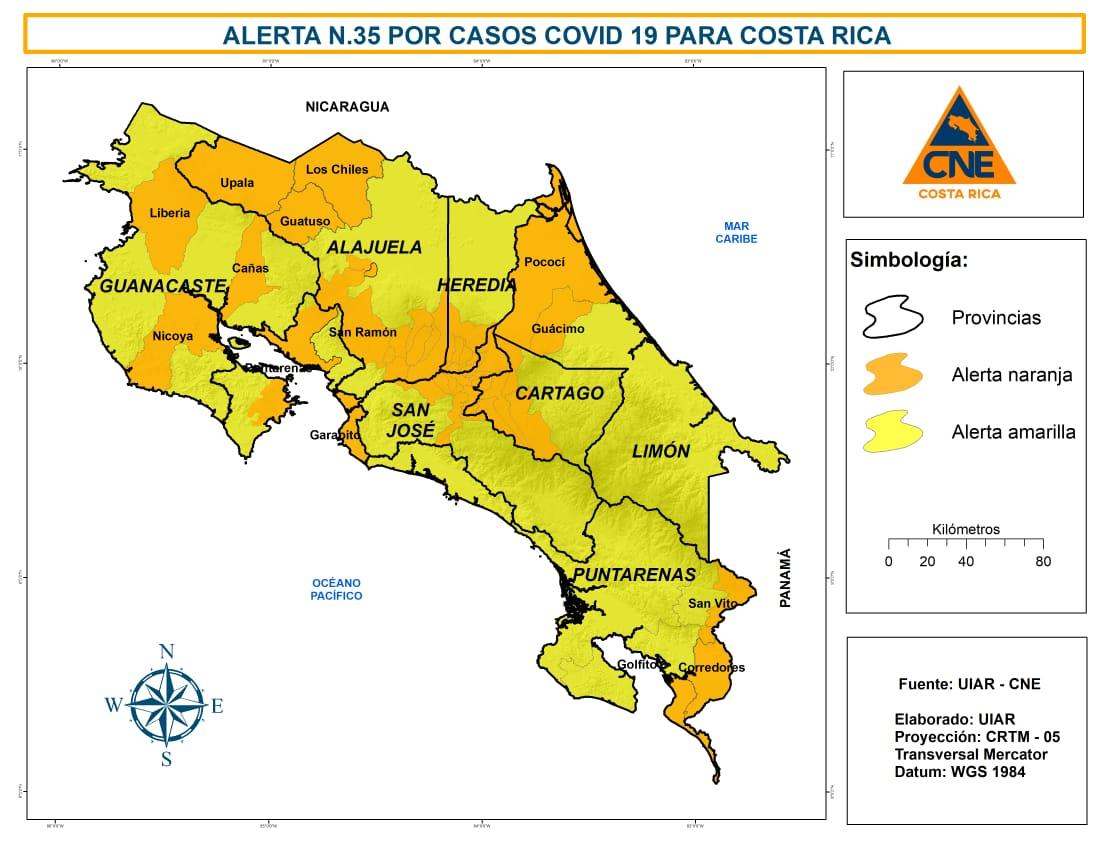 Once again the government leaders of Costa Rica have changed their mind on policy at the last minute, although they have their reasons.

Like another episode of Charlie Brown, where Lucy promises to hold the ball for Charlie to kick but pulls the ball away from him at the last minute, leaving him sprawled on his back, the government leadership has pulled back the promise of re-opening business and easing restrictions in an attempt to prevent the Covid-19 from spreading.

What is especially noteworthy in this instance is it was just 2 days ago on Wednesday, that the Health Minister, Daniel Salas, announced during a press conference the country would be moving to phase 3 opening of business as of July 20th. Now only areas under Yellow alert will move forward. This move would have allowed most commercial and retail business to be open during the week, throughout the country.

Again on a Friday, less than 48 hours after making a public statement, the same Health Minister, Daniel Salas stated that due to the risk of the Sars-CoV2 virus spreading, those areas currently under a Orange Alert would retain most current restrictions, while those Cantons under Yellow Alert would move to Phase 3 of easing restrictions. These changes will come into effect July 20th, 2020.

The main concern which evidently influenced this policy change was due to the increase in deaths attributed to Covid 19 which is now 47, with 5 occuring between Thursday and Friday, and 38 people currently occupying ICU beds out of a total of 111 possible. There are 257 ICU beds total available in the country.

Key points affecting our region in the Santa Cruz Canton, beginning on Monday:


While this is good news for business in our Canton of Santa Cruz, the extended restrictions affect almost 3 million residents of the country. It is difficult to determine whether residents under Orange Alert can come to our area due to the driving restrictions. One would assume this was considered as part of the justification for maintaining the strict restrictions on those areas and would serve to isolate us from the areas where incidence of the virus is highest.

Here are a few of the most recent alerts, showing how some Cantons have gone back and forth between Orange alerts. 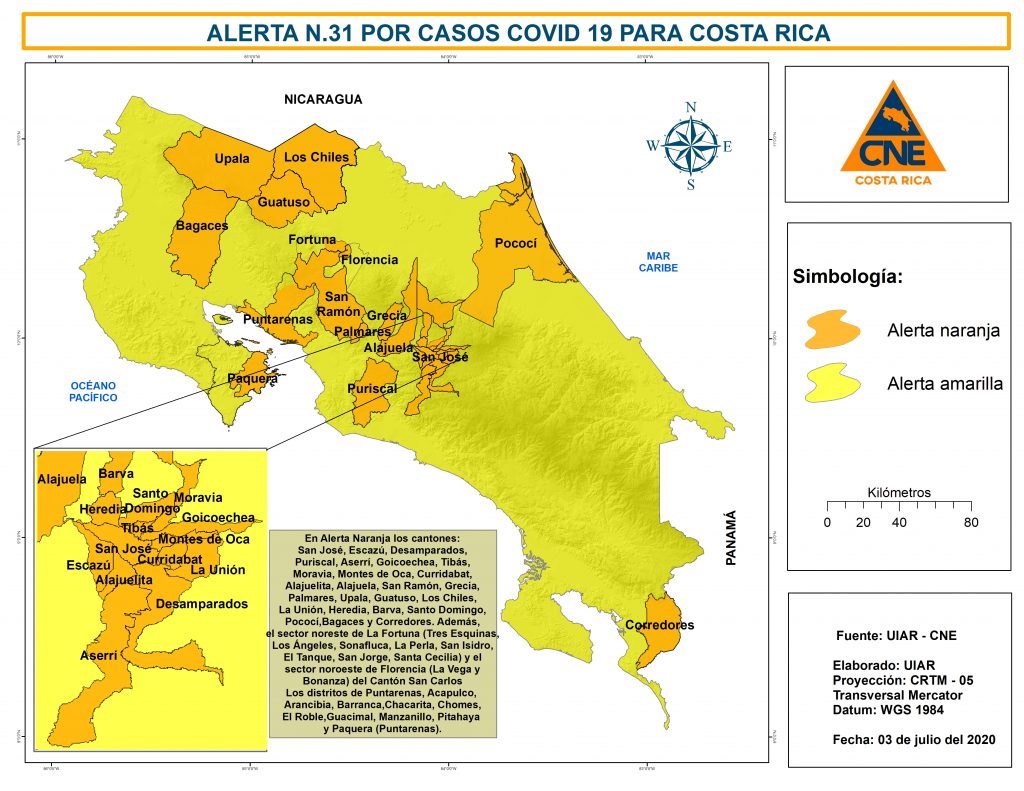 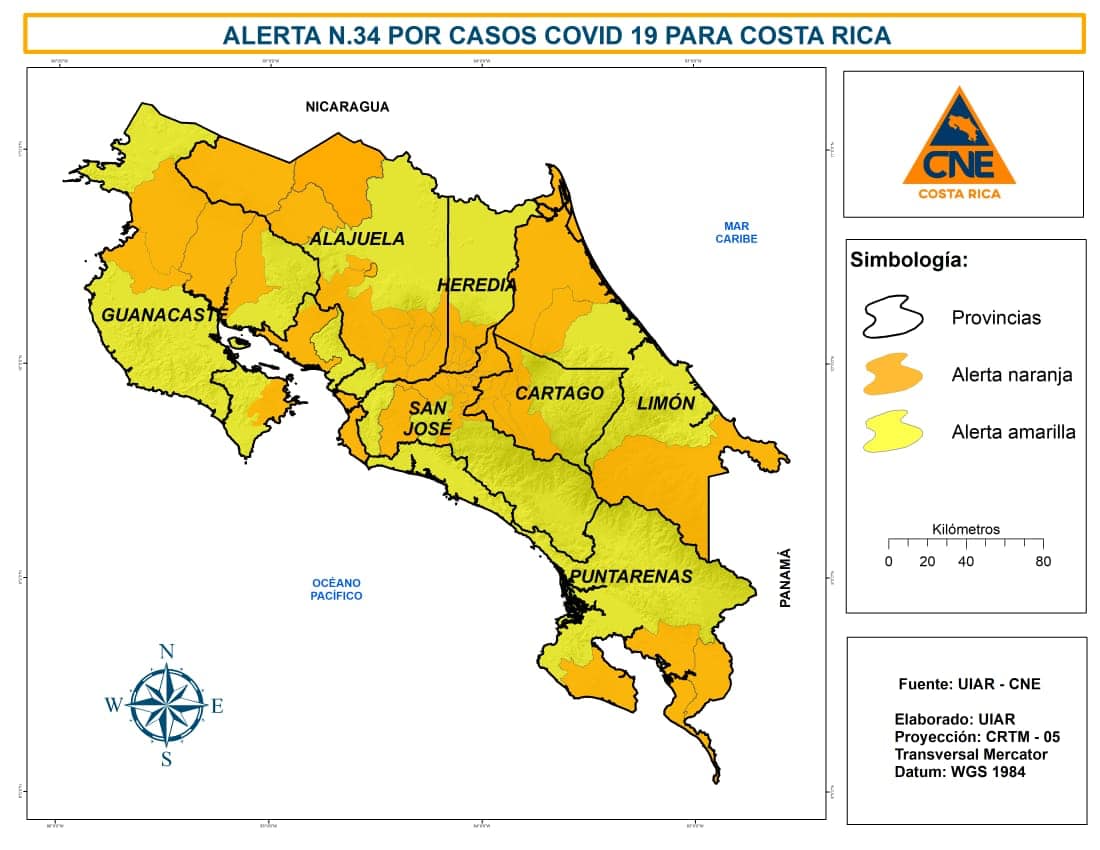 For many under Yellow Alert the most recent news is somewhat a relief, since we are able to drive 4 days per week and one day on the weekend, go to the beach for a few hours in the morning, enjoy a restaurant meal in a restaurant, go to a gym and go to church, all provided we wear a mask. Privileges we apparently have taken for granted.

Hotels are allowed 100% occupancy, potentially bringing in visitors from elsewhere in the country, while restaurants and gyms are restricted to 50%. Good news for those businesses but odd to restrict one business open to the public and not the other.

This hodgepodge of constantly changing regulation, makes it difficult for those trying to comply with the regulations, makes enforcement difficult and raises questions by those most at risk to contracting the virus. Added to this are the contradictory responses of various Ministers in charge of policy.

In a recent Press Release from the Camara de Turismo Guanacaste (Caturgua) they stated "It is not possible to take measures that are changed up to three times in less than 24 hours, it creates instability for both tourism operators and the users".

The current restrictions will remain in place until July 31st, and until then we must await further details.

It is unknown whether we can expect the airports to open to tourism on August 1st, as stated last Wednesday. At just two weeks away, with no stated plan on who is allowed to enter the country, and with regional borders closed, it seems highly unlikely. Anyone planning to leave or to return on a date in August would be advised to talk to their airline or travel agent.