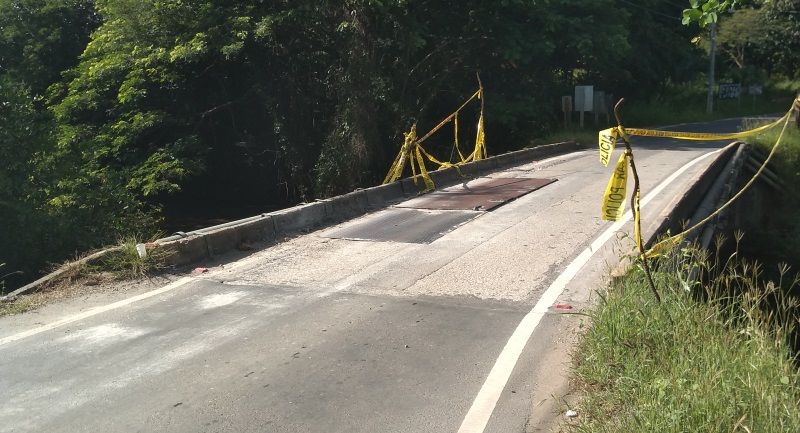 One of our local bridges, our lifeline to the outside world is well past its due date and likely needs replacement, not another patch.

Costa Rica is the land of Bailey bridges, which were designed to be temporary solutions. Sir Donald Bailey came up with the design  for troops during WW2 and Costa Ricas Ministerio de Obras Publicas y Transportes (MOPT) has implemented them across the country as a permanent solution linking many communities that would otherwise be unreachable.

Bailey bridgess are quick to install and can last a long time in place, whereas it can take months to construct a concrete bridge. Baileys also require less maintenance and can cost less than 1/4 of the price of a permanent bridge. The problem is once the structural components of the bridge fail they often need to be replaced.

In late October a 1 meter hole opened up on the east side of the bridge after a local bus went across. The weight of any heavy vehicle moves the entire structure. With heavily loaded trucks carrying construction materials and heavy equipment crossing over it's a miracle the bridge is still intact. Anyone driving fast over the bridge adds to the problem causing more concrete to fall. Rebar exposed to the salt air and heavy rains also have contibuted to the problem.

CONAVI and MOPT were contacted by local residents and sent pictures of the damage. Their temporary solution was to add a steel plate to cover the hole. MOPT continued to allow heavy trucks to cross without having conducted a full assssment to make sure the bridge is safe.

Less than a week later a new hole developed beside the original hole, now covered with a plate. No surprise to anyone who crosses that bridge on foot or on bicycle, as they can feel the movement of the bridge when a car passes. On Monday the new hole was over half a meter wide and the road remained open to traffic.

Local residents organized a group to warn motorists and to coordinate traffic, lead by Ivannia Alfarocoto and Lourdes Valverde, representatives of the local ASADA. Pictures were sent to MOPT, CONAVI and the Municipality of Santa Cruz was again notified of the urgency.

Once residents contacted local Media outlets, police arrived to manage the traffic. The bridge was closed to all traffic for several hours to assess the damage and to add a new plate. Residents are waiting to hear whether any additional repairs are needed and for confirmation that the bridge is safe. If it needs to be replaced it is up to the Municipality of Santa Cruz, the municipality we all pay taxes to, to come up with the budget to repair or replace.

In regards to the motorists who were inconvenienced by the closure and the repair work, many were understanding and grateful for the work being done by roadworkers, volunteers and the police. Many were not. Some people took to driving on the beach, which is both dangerous and illegal.

A new plate was installed to cover the new hole, while an assessment is done by engineers to determine the next steps.

For now we recommend that motorists drive slow when crossing, yield to oncoming traffice on the side where the road is marked with a CEDA sign and CEDA printed in large letters on the road, and allow cyclists and pedestrians to get clear of the bridge no matter which way you crossing.

The bridge needs replacing and it is a matter of time before it fails. With the added loads of rock and gravel headed to the Flamingo Marina Project from their quarry east of Potrero, people should expect this sooner rather than later.

For those people who do not yet grasp that in Costa Rica, the world does not revolve around them, we recommend you start making your alternative route for exiting Surfside, as major work may take months to complete and replacement with another Bailey bridge could take weeks.

There are alternative routes which are inconvenient and not well marked, but will get you where you need to go. Learn where they are. Explore.

To those who helped coordinate traffic and maybe saved some lives, GRACIAS.