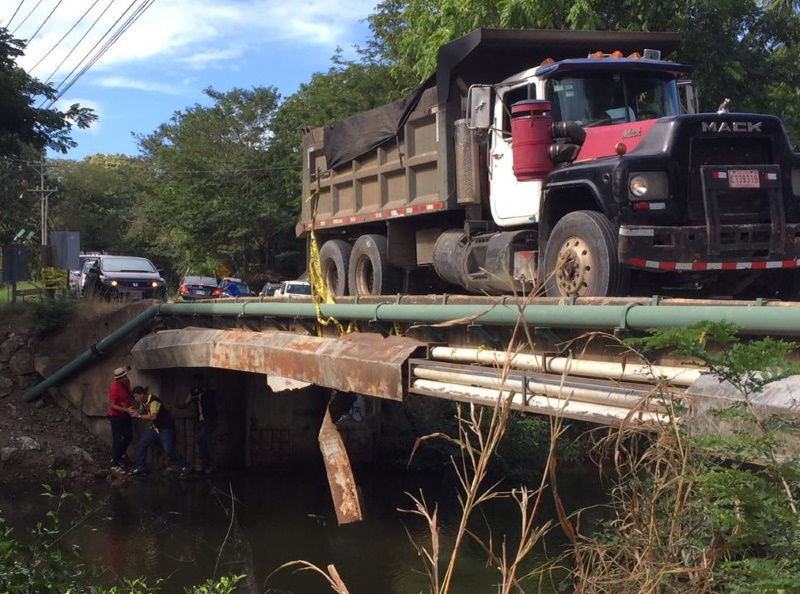 The bridge linking Surfside and Potrero to the outside world has been declared an emergancy by the Municipality of Santa Cruz.

Residents and concerned citizens traveled by bus last week to the Municipal offices in Santa Cruz to demand the bridge receives the attention required to get it repaired or replaced.

The bridge had repaired by a service crew from MOPT where steel plates were welded to the exposed rebar to cover the holes in the concrete surface. With the amount of heavy traffic this bridge receives, the repairs did not last a week before the steel plate had become loose.

Local residents depend on the bridge to get to work, grocery stores, and get their children to school. It is also a designated emergancy route in the case of a natural disaster. If the bridge becomes impassable, the only road out of the area is the Congo Trail which requires driving over the coastal mountains and through a river to get to Playa Coco or Communidad.

The mayor visited the community to inspect the bridge. It was quickly evident to all present how bad the bridge has deteriorated, and also witnessed the amount of traffic crossing over the one lane bridge on a hourly basis.

With Semana Santa starting next week, it is doubtful we will see any action until well into the new year.

Considering the constant flow of heavy trucks headed to the new marina project, as well as buses, heavy equipment and delivery vehicles, it may be time for the Muni to enforce a ban on heavy trucks, until the repairs can be completed. Without action from the Muni however that is an impossibility.

It should also be noted that the new aqueduct suppying water to Potrero, and the aqueduct to Flamingo from their well in Potrero, is attached to the bridge. In a worse case scenario should the bridge collapse, so too would the attached water pipes.

Given the deterioration it is more likely that the bridge will remain intact and the holes will increase in size to the point where truck will not be able to pass.

Hopefully Santa comes through and brings the community a new bridge for Christmas.