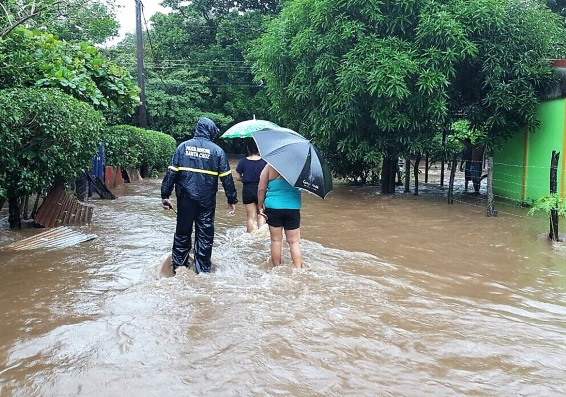 It's that time of year again when heavy rains can hit the area at any time. Of course the rains are a welcome seasonal necessity, especially here in Guanacaste.

The rains help to replenish the aquifer, turn pastures in lush grasslands for cattle and horses, and provide water for the dry tropical plants and animals that sustain them through the extended dry periods, typically from December through May. It also helps to keep the dust down on the dirt roads that mark out our community in Surfside.

Of course this time of year is also noted for the heavy rains that inundate our roads and ditches with a deluge of water, trying to make it's way to the estuaries and from there to the ocean. This is especially noticeable when the estuaries are blocked from reaching the coean by the beach, that builds up a natural barrier over the dry season. Once the estuaries build up to a certain point, the beach barriers give way and the estuaries clear.

What many residents fail to comprehend is that it is against the law to clear the sand barriers by mechanical means of any kind. No backhoes, or shovels are legally allowed to interfere with opening channels to the ocean.

This is due to the formation of mangroves surrounding the estuaries, which are protected in Costa Rica. These form in the areas blocked from reaching the ocean, either year round or seasonally and in low lying areas near the beaches all along the coast. These areas provide an essential breeding area for fish, mollusks, birds and plants. They also serve as a filter for waters reaching the coast, prior to entering the ocean. Everyone also needs to realize that these habitats can provide up to five times as much carbon-cleansing from the atmosphere as tropical forests.

Of course the issue is what to do when faced with a rising estuary and flooded streets. In some cases, these waters can flood nearby homes and properties. It can happen quickly and cause a great deal of damage.

Another problem we face, since many homes rely on septic systems, these can become saturated to the point of overflowing. Once that water gets mixed with the water headed to the beach, we increase the chance for of environmental issues, such as red tides. The roads can also become contaminated with sewage overflows, which then dries and can become airborne when the dry season comes around. Clearly an undesirable outcome for most of us. This problem increases as the community grows and more homes are built.

So what can be done?

The Surfside ASADA at one time maintained the community roads and ditches, since they were the only organization with funds available for such work. At some point in time AyA ruled that the ASADA could no longer direct funding to this purpose, and that it was the responsibility of the Municipality to maintain the roads. As we know, other than the main road, Route 911, our internal road maintenance is a low priority for the Muni. Many communities are far worse off than us, so we need to keep tthat in perspective.

The AyA ruling seems odd, considering that ASADA stands for Las Asociaciones administradoras de los Sistemas de Acueductos y Alcantarillados which translates to the Management Associations of Aqueduct and Sewerage Systems. If the community is comprised of properties with septic systems then it would seem logical that the ASADA would be justified in seeking to prevent flooding and seeing that the water drains away safely and quickly. They have the equipment, staff, budget and ability. They also are working on keeping our Blue Flag for the beach, so it would seem this would be an issue they should be concerned with.

Another community based organization, the Surfside Property Owners Association, simply does not have the budget or resources to do any major work on roads, and is similarly banned from altering the community roads. That said they do have the best chance of getting the attention of the Municipality and raising the issues.

So for now, it's up to the home and property owners to do what they can to help out. It was mandatory to have a culvert or ditch in front of every property in Surfside. While that may not be a provision required to get a water permit any longer, it is advisable that everyone complies with this as a common sense solution to keeping the water moving. If you have one, make sure it is kept clear of debris.

If you have a ditch or culvert between your property and the road, keep it clear. These tend to fill up with tree branches, plastic, and weeds, so try to keep them open. If you are able, dig them a little deeper. You can also maintain a small ditch from the back of your property to the front to help water flow to the roadside ditches and keep water from building up around your septic. There are planty of able body's in the community that can help with this kind of work.

While most builders are concientious of their neighbors, several construction projects have blocked the ditches with fill to get building materials in and some are dumping sand and gravel on the roads. Some completed projects have driveways with no culvert or means for the water to flow unobstructed alongside the road. In such locations the water seeks the lowest point which can be the roadway itself. That leads to potholes, pools of water for mosquitoes and hazards for people walking or riding. Not the most considerate way to join a community. Maybe point out the issue when you have a chance, or notify the Property Owners Association so they can keep a list.

While it may seem that there is little we can do, there are steps everyone can make that can help. Let's stop surviving through the rains to dry season and start working on solutions now and for the future.