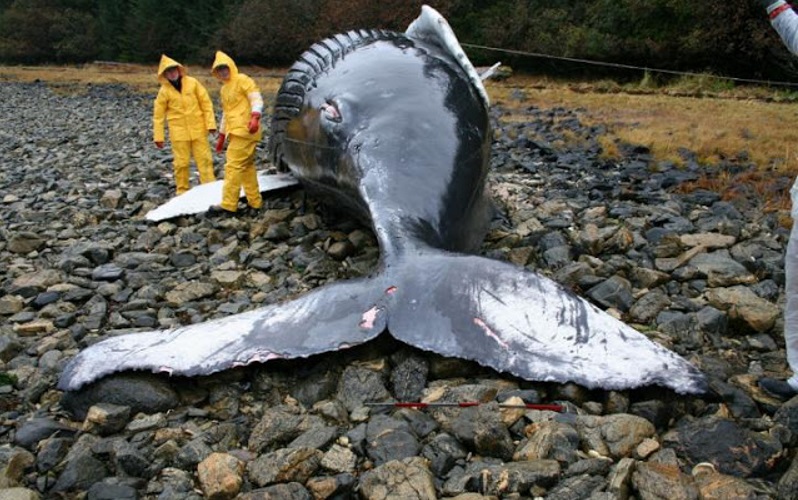 A long-standing mystery among marine biologists is why otherwise healthy whales, dolphins, and porpoises — collectively known as cetaceans — end up getting stranded along coastal areas worldwide. Could severe solar storms, which affect Earth’s magnetic fields, be confusing their internal compasses and causing them to lose their way?

Although some have postulated this and other theories, no one has ever initiated a thorough study to determine whether a relationship exists — until now. NASA heliophysicist Antti Pulkkinen, who works at the agency’s Goddard Space Flight Center in Greenbelt, Maryland, has teamed with the federal Bureau of Ocean Energy Management, or BOEM, and the International Fund for Animal Welfare, or IFAW, to determine whether a link exists.

Strandings occur around the world, involving as few as three to as many as several hundred animals per event. Although a global phenomenon, such strandings tend to happen more often in New Zealand, Australia, and Cape Cod, Massachusetts, said project collaborator Katie Moore, the director of IFAW’s global Animal Rescue Program. Headquartered in Yarmouth Port, Massachusetts, IFAW operates in 40 countries, rescuing animals and promoting conservation to secure a safe habitat for wildlife.

“These locations share some key characteristics, such as the geography, gently sloping beaches, and fine-grained sediment, which we think all play some role in these events,” she said.

Another possibility is that these animals’ internal compasses are somehow skewed by humans’ use of multi-beam echo sounders and other sonar-type equipment used to map the seafloor or locate potential fishing sites, to name just a few applications.

“However, these human-made influences do not explain most of the strandings,” said Pulkkinen, an expert in space weather and its effect on Earth. “Theories as to the cause include magnetic anomalies and meteorological events, such as extreme tides during a new moon and coastal storms, which are thought to disorient the animals. It has been speculated that due to the possible magnetic-field sensing used by these animals to navigate, magnetic anomalies could be at least partially responsible.”

Indeed, magnetic anomalies caused when the sun’s corona ejects gigantic bubbles of charged particles out into the solar system can cause problems for Earth-orbiting satellites and power grids when they slam into Earth’s protective magnetosphere. It’s possible they could affect animals, as well, Pulkkinen said.

“The type of data that Antti has accumulated, together with the extensive stranding data at our disposal, will allow us to undertake the first rigorous analysis to test possible links between cetacean mass strandings and space-weather phenomena,” said Desray Reeb, a marine biologist at BOEM’s headquarters in Sterling, Virginia. Reeb approached Pulkkinen about launching a research effort after hearing his presentation about space weather in June 2015.

With funding from BOEM and NASA’s Science Innovation Fund, Pulkkinen and his collaborators are carrying out a massive data-mining operation. The team will analyze NASA’s large space-weather databases, including field recordings and space observations, and stranding data gathered by BOEM and IFAW.

“We estimate that records on the order of hundreds of cetacean mass strandings will be available for study, thus making our analyses statistically significant,” Pulkkinen said. “We therefore expect that we will be able to reliably test the hypothesis. So far, there has been very little quantitative research, just a lot of speculation,” Pulkkinen continued. “What we’re going to do is throw cold, hard data at this. It’s a long-standing mystery and it’s important that we figure out what’s going on.”

The team expects to complete the study by the end of September and publish its findings in a scientific, peer-reviewed journal. Should the study reveal a statistical correlation, team members said the results won’t necessarily imply a causal link. However, it would provide the first thorough research into this hypothesis and offer the first step toward determining if it’s correct.

“The results of this study will be informative for researchers, stranding network organizers, resource agencies and regulatory agencies,” Reeb said. “If we understand the relationship between the two, we may be able to use observations of solar storms as an early warning for potential strandings to occur,” added Moore, who said she “was immediately keen” to get involved in the study. “This would allow stranding responders in global hotspots, and really around the world, to be better prepared to respond, thus having the opportunity to save more animals.”
Contacts and sources:
Lori Keesey