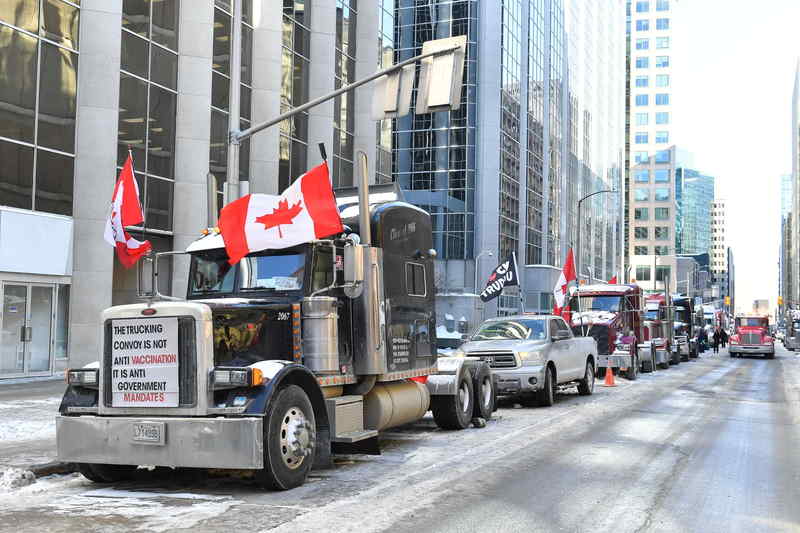 The Canadian government is trying everything they can to end the protests in Ottawa and now spreading across Canada.

GoFundMe came under fire last week after it took down the Freedom Convoy 2022 fundraising collection account, saying it violated its terms of service. At first, it said donors would have two weeks to request a refund and that any remaining funds were distributed to "credible and established charities."

GoFundMe has its Head Office in California. After outcry arose from several Republicans, most notably Senator Ted Cruz, Florida Governor Ron DeSantis and Texas Attorney General Ken Paxton, the company said it would refund all donors' money instead.

The page had raised about $10 million before it stopped the convoy's campaign.

The convoy's organizers have since shifted the fundraising efforts to another platform, GiveSendGo, where millions of dollars have poured in.

Rumble, an online tech company and video platform alternative to Youtube, offered assistance to the GiveSendGo management when they were inundated with donations.

In retaliation, the Ontario Government has made donating to GveSendGo on behalf of the Trucker Fundraisers an illegal action.

According to the Globe and Mail:

The Ontario government says it has successfully petitioned a court to freeze access to millions of dollars donated through online fundraising platform GiveSendGo to the convoy protesting COVID-19 restrictions in Ottawa and at several border crossings.

The province obtained an order from the Superior Court of Justice that prohibits anyone from distributing donations made through the website’s “Freedom Convoy 2022″ and “Adopt-a-Trucker” campaign pages, said a spokeswoman for Premier Doug Ford.

Ivana Yelich said the order binding “any and all parties with possession or control over these donations” was issued Thursday afternoon. She cited a section of the Criminal Code that allows the attorney general to apply for a restraint order against any “offence-related property.”

The law that was used to seize the donations is Section 490.8 of the Criminal Code, one used in cases to seize assets of those engaged in criminal activities. 490.8 says three things must be shown::

What is unclear the "indictable offence" part of the order is, since it is clear the money exists and they know where it is. The Truckers Group have not been charged with any "indictable offence", which in Canada would imply a serious crime has been commited. Likewise the organizers have not been charged with any crimes nor have they been accused of such.

The order was granted in private without the Organizers or their legal representatives being present. Clearly a draconian action on the part of the government in a desperate attempt to bring the protest to a close, one way or another.

Know this! Canada has absolutely ZERO jurisdiction over how we manage our funds here at GiveSendGo. All funds for EVERY campaign on GiveSendGo flow directly to the recipients of those campaigns, not least of which is The Freedom Convoy campaign.

Canada is attacking the Canadian non-profit "Freedom 2022 Human Rights and Freedoms" which was set up on January 30th after GoFundMe suspended their account.

However, the GiveSendGo releases the funds to the American non-profit "Incorporated Freedom 2022 Human Rights And Freedom Association" which then distributes the funds via Crypto to the Canadian Organization #TruckerConvoy2022.

This is perfectly legal. Canada has no jurisdiction over the funds, and the American non-profit is in a friendly state.

This action will have the opposite effect on an ever growing movement to end government overeach, and stop government mandates from becoming acceptable in a democractic nation. The fringe group of protestors are growing larger every day.

It's time to open a dialogue.