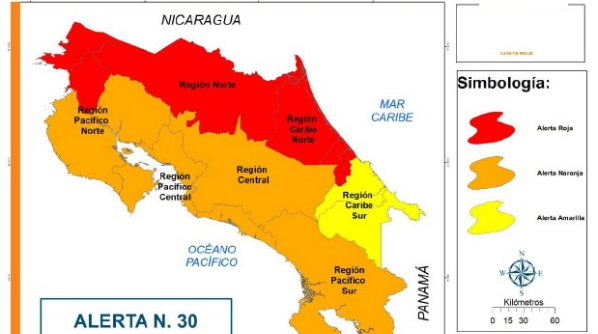 The Northern Regions of Costa Rica are now under Red Alert for Tropical Cyclone Bonnie.

Alejandro Picado President of the National Emergencies Commission (CNE), had previously stated “We have activated the national emergency operations center of the 82 municipal emergency committees and the declaration of orange alert. In addition, all institutions can position machinery or resources to respond to the emergency,” explained .

He also asked the population to take extreme precautionary measures, as weather conditions can be severe in certain areas.

Authorities noted several routes with serious problems, such as Route 32, which is closed due to landslides.

“The hills that are next to the roads are very saturated. We have Route 32 closed, and Route 27 has always been characterized by landslides, so we have to be careful,” recalled the President of the National Emergencies Commission.

“If the tropical wave evolves into something bigger, I call on people to avoid leaving their homes,” concluded the CNE Officer.

The Ministry of Public Education (MEP) has suspended school on Friday.

It appears from the weather models the main storm will arrive in Surfside in the early hours of Saturday morning, although we can expect winds and thunder storms as early as noon on Friday. The bulk of the storm is predeicted to have passed late Saturday evening.